The statement that "no reference can be found in the...

The statement that "no reference can be found in the Scriptures wherein Jesus ever claimed to be God," made by a Christian Science lecturer and reported in your paper recently, does not deny the divinity of Christ, and the conclusion that it does, can be only as a result of false reasoning or lack of information as to Christian Science teaching. In Christian Science a distinction is made between the humanity of Jesus and the nature of the eternal Christ; and because the Christian Science view differs from that of orthodoxy, the erroneous presentation of the subject in the letter published in a recent issue is undoubtedly accounted for.

Christian Science teaching is based on the spiritual interpretation of the Scriptures, and it declares that Jesus was born of Mary, and his own reference to himself as the "Son of man" confirms this statement; but he presented the highest concept of man that mortals have ever beheld. The tendency for many centuries has been toward worship of the physical man Jesus; but Jesus expressly forbade this, and he directed thought in contemplation of an entirely different nature than his physical body when he said: "Why callest thou me good? there is none good but one, that is, God." Again, when dull human perception would have deified his humanity as containing within itself the power to perform the works he was doing, he said, "I can of mine own self do nothing," "but the Father that dwelleth in me, he doeth the works." These sayings show how clearly Jesus declared that he was not God.

Send a comment to the editors
NEXT IN THIS ISSUE
Article
We note in a recent issue, in a report of Evangelist—'s... 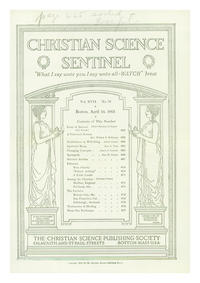