The history of human suffering has been a continuous narration of hope and disappointment, of struggle and defeat. The instinct for freedom from pain has always been insistent; even those who have been taught to believe that suffering is a divine agency for good have never been able to resist the urgency of the illogic of their longing to escape its toils. Meanwhile, impelled by the desire to help poor humanity, many earnest men have labored heroically to discover some panacea for human ills, with the result that, as freely conceded by them, no unfailing drug remedies have ever been found.

The recognition of the inability of medical research and practice to bring surcease of suffering has recently been expressed by a physician of international reputation, a member of the Royal Academy of Medicine of Naples, Italy, in a published protest that patients should not be harassed by "the doubts that beset the minds of their physicians," to whom, he says, "the empirical nature of treatment is only too obvious;" and a sufficient reason for this plea may be found in his statement that "in these days of the impersonality of force, men know that there is no power which can resist that fiat of omnipotence, natural law." 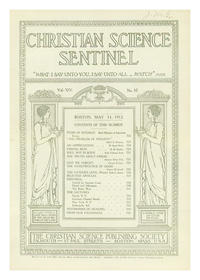