There are many students of Christian Science who for various reasons are not privileged to attend the church services which others find to be such a source of uplift and encouragement. Often, too, though perhaps unconsciously, there creeps in a sense of limitation and self-pity which is not far removed from doubt and ingratitude. Then comes the tendency to be resigned to this deprivation, to slip into a listless attitude. Being deprived of the object desired, the effort to make the most of what one has is not sufficiently valued. Now the deprivation of the services, though serious, is not so serious, not so much to be deplored, as is this apathy, and against the influence of such predisposition we all need to be on our guard.

In Christian Science we are learning that it does not help us to run away from the environment in which the truth finds us, however difficult things may appear; also that there is a great difference between patiently and lovingly accepting the task of working out of imperfect conditions, and supine resignation to them. To be resigned to circumstances usually witnesses to the indifference which is willing to accept the limitations of a condition, rather than to the meekness and humility which take up the cross and patiently progress out of it, for while patience implies the thought of calmly waiting for a desired end, it includes also a quiet activity which is steadily moving toward that end. Thus through growth and endeavor, by "patient contunuance in well doing," we gradually gain that spiritual sense which results in healing and in freer, happier conditions. 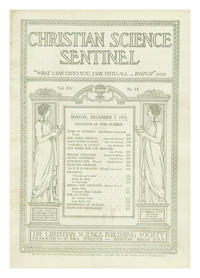