Two men once stood at night in the lamp-room of a lighthouse. One was the lighthouse-keeper, and the other a stranger. It was a wild and stormy night, and the wind shrieked and howled round the glass walls as it rushed by on its hurricane way, while ever and anon from far below came the thunder of the waves as they hurled themselves upon the rock upon which the lighthouse was built and threw up spray far into the night.

"Are you never afraid?" asked the stranger, during a lull in the storm, as he watched the other tend his lamps. "Of what?" said the keeper, looking up. "Afraid?" replied the stranger. "Afraid that one night greater gust of wind or a greater wave than ever before will come and sweep the lighthouse into the sea?" The other said nothing for a time, but went on tending his lamps; and when he did speak the stranger noticed that there was a smile upon his face which was good to see, for it seemed to speak of a great security. "Yes," he said at last, "I was afraid of that once. But that was a long time ago, when I first came here; and I have long since ceased to be afraid. Would you like to know how I was cured?" "Yes," replied the stranger; "tell me." "I will do more than that," said the keeper, "I will show you, if you will come with me." And he took the storm-lamp from where it stood near by, and they went out of the room together and began to descend the winding staircase which led to the rooms below. They went down a long way, and as they left one flight after another behind them, the sound of the storm grew fainter and fainter, till at last it was heard only as a distant murmur and then ceased altogether. 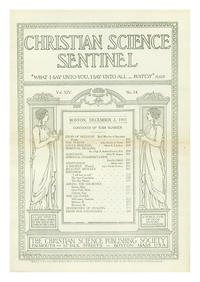