"What we want to do," says the Secretary of the Inland Waterways Commission, "is to get back to nature in dealing with water First to prevent floods, and second to compel the water to run clear and pure. It is a fact that each year the rivers of mainland United States pour into the sea a thousand million tons of richest soil—matter in the form of suspended sediment, an impost greater than all our land texes combined and a commensurate injury to commerce in the lower cult of control by the unstable load. The rivers, which are rendered capricious and diffi-difference in the power value alone between controlled and uncontrolled streams would in ten years pay the entire cost of stream control in the United States. And this, coupled with the billion dollars' loss every year through soil erosion, due to floods, would construct a comprehensive system of water control in the United States."

The magnificent forests of the country everywhere, says the Independent, have simply been slaughtered. Vast sections of Georgia and the Carolinas are absolutely stripped of yellow pine. The stumps only remain, with strewn brush. Pennsylvania can show us some of the most blasted sections of the whole country. The superb chestnut forests of Connecticut have been obliterated, and rocky hills, bare of all vegetation, take their places. The editor of the Jackson Patriot, of Michigan, says that he went last summer, for two days, on the Au Sable River, right through the heart of the white pine region, before he saw a single white pine. The great furniture-building interests of Grand Rapids are warned that their work is about done. The Chicago Record-Herald states that in Illinois nearly one hundred and fifty millions is invested in industries approaching extinction. 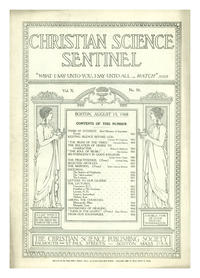