On Dec. 23, 1897, I met with a railroad accident on the C. & N. W. Railroad, on which I was employed as locomotive fireman. I was picked up by fellow-workmen and taken to Milwaukee on the first train. The company's physician was called, and also my family physician, my home at that time being in Milwaukee. My injury then appeared to me very slight, and I felt it my duty to go to work, but the doctor told my wife that an injury of this kind would not develop for about three months, there being a serious lesion of the heart. His predictions came to pass, for I gradually grew worse; consultations of physicians were called at various times, including eight of the best in Milwaukee, and the Brotherhood of Locomotive Firemen, of which I am a member, paid my total disability claim after a rigid examination by their physicians. My family physician told a member of my family that there was no medical record of a patient with this injury who lived longer than three years. I suffered untold agony, and the only relief I could get was by hypodermic injections of morphine.

Having been told by all these physicians that there was no medical help for me, I was in despair and looked upon my time as being very short in this world. At this time Christian Science was brought to my knowledge by a lady who is not a Scientist. I very strongly questioned the healing power of Christian Science, but as my wife was in favor of my giving it a trial, I finally consented, as I could see no other possible channel of relief, and at this juncture I received a letter from my brother and also from my sister, advising me to try Christian Science. I did so, and after taking one treatment I went to bed and slept eleven hours, being the first night's sleep I had had for over two years. I was completely healed in a comparatively short time and have again passed the necessary medical examination required by all railroad companies. I would be pleased to answer any inquiries on this subject.

Send a comment to the editors
NEXT IN THIS ISSUE
Testimony of Healing
I feel that the health and happiness which is in our home... 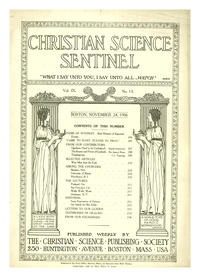