Nearly eight years ago Christian Science was first brought to my attention through the healing of my sister, who had been a semi-invalid for several years previous. On witnessing this sudden emergence from darkness into light, I naturally became interested, sought help, and in one week's time was greatly benefited both physically and mentally, being healed of sick headaches, to which I had been subject as far back as I can remember. Other physical ailments have also been destroyed through the application of Christian Science. One in particular I would like to mention, as it may give some seeker for the light encouragement to press on and be not weary in well-doing. I was attacked with a form of rheumatism whereby I was greatly hindered in walking, and at two different periods (about six days apart) on awaking in the morning it was with the greatest difficulty that I could move. I managed within a short time to get out to a practitioner, who lived near where I then resided, and a treatment in each instance put me on my feet in more ways than one, and the ailment was entirely destroyed in a short time.

I could never enumerate the many proofs I have had, and do have every day, of God's care and protection through the study and right application of Christian Science; the ever-present help it is to my loved ones; the ailments that have been destroyed through absent treatments; the knowing that we can lift the burdens that beset humanity, and the peace it brings to us in relieving such as desire to live rightly, lovingly, and purely; and to realize all the good that is for each and every one.

Send a comment to the editors
NEXT IN THIS ISSUE
Testimony of Healing
Shortly after rising one morning, I was attacked by a... 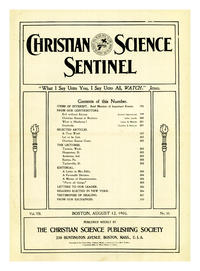