Attorney General Moody has written a letter to Secretary Taft of the War Department, giving his views on the general subject of peonage and its bearing on the employment of "coolies" in digging the Panama Canal. He finds that "coolieism," so-called, is a condition of involuntary servitude, and says: "In the employment of labor upon the Canal the utmost care should be taken to exclude the conditions which have been indicated as those of involuntary servitude, or any other conditions of like effect or tendency. This care should be exercised not only in making the contracts to which the United States is a party, but in scrutinizing the contracts, usages, and practices between those who agree to furnish contract labor to the United States and the laborers them selves. What rules, regulations, officers, and inspectors may be needed, in order that the employment of labor may not be violative of the thirteenth amendment, may well be left to the discretion of the Commission."

The opinion of Attorney General Moody regarding the application of the eight-hour law on the Isthmus of Panama has been made public. He holds that the act of August 1, 1892, which limits and restricts to eight hours the daily service of labor and mechanics employed by the Government of the United States or by any contractor or subcontractor upon the public works of the United States, applies to the employment of laborers and mechanics in the construction of the Panama Canal.

Send a comment to the editors
NEXT IN THIS ISSUE
Article
An Interview with Rev. Mary Baker G. Eddy 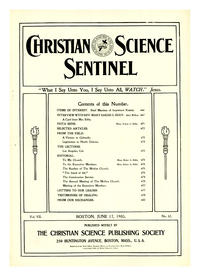