The Amplitude of Christian Science

Every step taken in the Christian Science movement has been a progressive one. It is only necessary to note the phenomenal growth of its organization to establish the correctness of this statement. That such a very large body of people have accepted this new teaching within the last thirtyfive years, is not only a proof of the strength of its organization, but is also a proof that organization is a necessary factor at the present time in the establishment and growth of any religious movement. The individualism which is expressed in the adage, "Every one for himself," has led, and still leads to lawlessness. Independence in a few leads to a condition of servitude and bondage in others; it fosters a spirit of socialism and anarchy, and thus becomes the animus of socialistic wars.

Historically considered, the French Revolution, that terrible outburst of popular discontent, was an attack on the social system rooted in the feudalism of the Middle Ages. The desire for "Liberty, Equality, Fraternity," led men into a realization of the necessity for a more liberal and generous view of humanity, which should lie at the root of all organization. 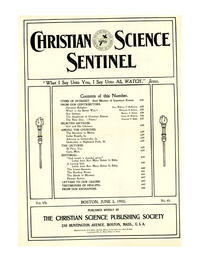