During the latter part of the South African war I was stationed in a Canadian city to carry out certain work for the home government. It was my custom to attend the Christian Science services held there, and I was also accustomed to come to the beautiful little church some half hour before the service began, to enjoy the peace and calm to be found there, after the turmoil of the week. Sitting thus one Sabbath, the First Reader came to me, with countenance, as always, beaming with love and happiness. There were to be great changes in church, he said; had I not seen the Sentinel? I had not. "Then you do not know that there is a new ruling which ordains that new Readers shall be elected every three years. To-day the new ones take up their office." I was young in Science then, and I said, "But will you not feel it very much, to give up this post, after having held it for so many years, and after being identified with the building of this church?" With brave eyes and brave words he replied, "If I do, it just shows how necessary the new ruling is."

As the service began thus, with an atmosphere of love, so did it end. Those who had lately held the post of First and Second Reader were the first to congratulate and thank with hearty sincerity the new Readers who conducted the service. This little episode affected me more, I think. than any of the mighty works of healing which I have since seen accomplished in the field of Christian Science. God grant that we, too, always be ready to show such selfabnegation, such love and ready obedience to divine Principle. 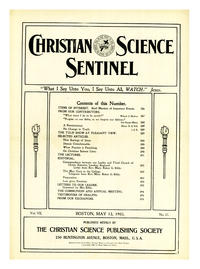