The Psalmist's query, "What shall I render unto the Lord for all his benefits toward me?" describes the grateful upspringing of that newly awakened sense which comes to those who have been healed in Christian Science; and his answer, "I will offer to thee the sacrifice of thanksgiving: . . . I will pay my vows unto the Lord now in the presence of all his people," tells how this thanksfulness may be expressed. Never before in any religious services has this form of worship been given the prominence it has in Christian Science. At the Wednesday meeting those who have been healed come to a reciprocal service, where they not only receive new blessings, but have also an opportunity to prove the truth of the Master's saying, "It is more blessed to give than to receive."

There are, however, some who fail to respond to the loving invitation to tell what God hath wrought for them, and among other reasons assigned for their remissness, is a fear lest a recital of past ills may tend to bring them back. It would seem that all earnest students of our textbook should be able to discriminate between the idle rehearsal of mortal experiences which tell of sin and sickness, and the declarations of Truth's all-power which has been revealed in the destruction of these evils. In Christian Science we learn that evil is unreal because it is not of God and we are healed of both sin and sickness by the understanding of their unreality. For this reason we do not talk of evil, nor even think of it, if we are wise. Our testimonies are, however, addressed in part to the thought which has not proved the healing power of Truth, and to be intelligible to this thought, the ordinary terms of expression must be used, but it is never necessary to allow the impression of evil to predominate. Occasionally a testimony is given with such a detailed account of past suffering that the story of the divine deliverance is crowded into a few words, and a sensitive thought, whether that of speaker or listener, may be temporarily disturbed thereby, as when one awakens from a distressing dream. This result can never follow, however, where the consciousness of the omnipotence of Truth and Love is realized and expressed. 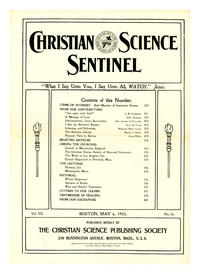