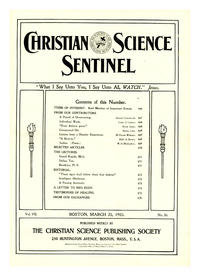 Professor Robert Francis Harper of the University of Chicago, who is director of the expedition of the Oriental Exploration Fund, now in Assyria, has received a telegram announcing that the work of excavating the ruins of Bismya, which was suspended last autumn, is to be resumed by permission of the Turkish Government.
Article

A Period of Overturning

It is an interesting and significant fact in connection with Mrs.
Article

There are many sentences in the Bible which seem so clear in their statements, so unmistakable in their meaning, and which are so illustrated in our familiar experiences, that there can be but one thought as to the lesson we are to learn from them, and such a sentence is this from Galatians, "Whatsoever a man soweth, that shall he also reap.
Article

The old proverbs and bits of wisdom, as well as the stories of ancient mythology which have stayed with us from our school days, often come back with renewed force as we see them in the added light which Christian Science throws upon things.
Article

In the tenth chapter of John, we are told that Jesus was at Jerusalem at the "feast of the dedication," which some historians designate the "Dedication of the Altar," and others the "Lights," one of the observances being the illumination of the temple for eight days.
Article

Lessons from a Homely Experience

Some years ago my parents lived on a farm, and while spending a summer vacation there I thought to improve the condition of the homestead somewhat.
Article

When I was a child a periodical came to our home, one page of which was devoted to "The Shut-ins.
Poem

Keep step, my brothers, hail the glorious fray!Together march to purify to-day!All for each, and each for all,And Love decrees that none shall fall.
Article

To object to Christian Science because it denies the testimony...

To object to Christian Science because it denies the testimony of the physical senses, betrays a serious ignorance of even natural science, for the explanation of all phenomena, including the fundamental ones of form, color, and mass, rests on theories contrary to what the senses behold.
Article

Ever since the allegorical talking serpent in the Garden of Eden...

Ever since the allegorical talking serpent in the Garden of Eden attempted to pattern after the Creator by making gods of men, the human mind has been busy in its attempts to simulate divine activity.
Article

A Christian Scientist could accomplish but little by...

A Christian Scientist could accomplish but little by simply asserting that there is no such thing as disease or discord, he must prove their insubstantiality by grappling with and overcoming them.
Article

Only to the sinner who has in some measure found that...

Only to the sinner who has in some measure found that there is no permanent peace, pleasure, or profit in evil thinking or doing, can the gospel of Christ give out its saving and redeeming power.
Article

Try to follow Jesus Christ, not because you believe exactly...

Try to follow Jesus Christ, not because you believe exactly as your father believed, but because you want to live a good life according to your lights.
Article

If I had any idea that the general government was so...

If I had any idea that the general government was so administered that the liberty of conscience was endangered, I pray you be assured that no man would be more willing than myself to revise and alter that part of it, so as to avoid all religious persecutions.
Article

The initial services of the local branch church were held in its beautiful and classic new church edifice Sunday morning, February 12.
Article

The following interesting item is clipped from the Cleveland Leader of March 14:—
Editorial

As new rules are given by our Leader, from time to time, it is important that we clearly comprehend their intent.
Editorial

It is doubtful if the present age presents a more surprising and incongruous spectacle than that of the pronounced opposition of many Christian ministers to the asserted possibility and experience of spiritual healing, The great body of evangelical clergymen accept the New Testament narrative of this healing as historically true, and, if questioned, they would probably say that all things are possible to him that believeth; nevertheless, both in their manifest removal from any thought of trying to profit by the privilege themselves, as well as in their ofttimes outspoken condemnation of those who are conscientiously endeavoring to fulfil our Lord's commands to heal the sick, they give unmistakable evidence of the entire absence, not only of faith, but of inquiring interest in the subject.
Letters

A Letter to Mrs. Eddy

It is with deep gratitude and love that I publicly acknowledge...

It is with deep gratitude and love that I publicly acknowledge the many benefits derived from my two short years' study of Christian Science and daily striving to put into practice this healing truth.
Testimony of Healing

I wish gratefully to send our testimony to the Sentinel

I wish gratefully to send our testimony to the Sentinel.
Testimony of Healing

In August, 1903.
Testimony of Healing

While reading the testimonies of healing in the Sentinel,...

While reading the testimonies of healing in the Sentinel, I remarked to my, wife that the most of them were from women, and she said, "Why don't you give your testimony?
Testimony of Healing

About three years ago I came to Christian Science, seeking...

About three years ago I came to Christian Science, seeking help for a shattered nervous system.
Testimony of Healing

It is with sincere gratitude for the many blessings which...

It is with sincere gratitude for the many blessings which Christian Science has brought me that I give this testimony.
Testimony of Healing

Christian Science found me ready to bury my dearest...

In gratitude to our dear Leader, and for the good of...

In gratitude to our dear Leader, and for the good of humanity, I wish to add my testimony to many which I have read in the Christian Science Sentinel and Journal.
Testimony of Healing

For seven years I have received the blessings of Christian Science

For seven years I have received the blessings of Christian Science.
Testimony of Healing

The teachings of Christian Science are simple yet mighty

The teachings of Christian Science are simple yet mighty.
Poem

So Shall the Sun of Righteousness Arise

with contributions from Ozora S. Davis