It is with a heart full of gratitude to God that I write...

It is with a heart full of gratitude to God that I write of my healing through Christian Science. It is more than five years since I was healed of an organic disease after having been told by the physician that I could not live a month without a surgical operation, and he gave no hope that I would live through it, for he said my heart was in a very weak state at this time. A friend who had been healed in Christian Science after many years of suffering, came to me in my trouble and told me that she knew I could be healed through that same agency. It did not seem possible, as I had suffered for more than thirteen years, had two slight operations, and had what was considered the best medical treatment both in the West and South, also in Philadelphia and New York, but with only temporary relief.

During my treatment in Christian Science for this trouble I was also healed of a great many minor ailments. I had worn glasses for twenty years, having had to put them on when only a child, but I have had no need of them for five years. It has been my privilege to see many cases of healing since I came to Christian Science, in many instances where just the spoken word did the work.

Send a comment to the editors
NEXT IN THIS ISSUE
Testimony of Healing
About seven years ago I was drawn to Christian Science... 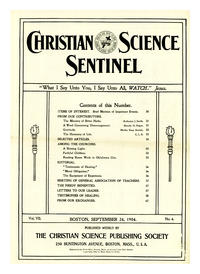