The second year's work upon the Chautauqua grounds at the beautiful lake, miscalled Devil's Lake, has been a source of gratification to the Scientists. A fund for the building of a cottage was started before the opening of the Assembly and fourty-five dollars in cash was secured. A large tent was again rented for this year, and a carpet and some additional furniture was put in, making a pleasant reading room and resting place. A large amount of literature was distributed and a number of people experienced their first interest in Christian Science through their visits to the tent. The Christian Science tourists expressed much appreciation of the privileges of this common meeting spot. A lecture for July 14, under the auspices of First Church of Christ, Scientist, of Devil's Lake City, was put upon the regular Chautauqua programme. The lecture was delivered by Judge William G. Ewing. The following account of this effective lecture appeared in the Grand Forks Herald.

"Notwithstanding the excessive heat of Sunday afternoon an audience of about twelve hundred gathered at the auditorium to listen to the lecture delivered by Judge William G. Ewing of Chicago on the subject of Christian Science. At three o'clock the speaker appeared on the platform with the manager, Rev. Mr. Swift (Baptist). Mr. Swift spoke briefly upon the breadth of Chautauqua platforms, which here embraced lectures by Catnolic priest and Christian Scientist on consecutive Sundays. He then referred to the well-known abilit and Christian character of the lecturer and proposed that, in deference to the speaker and his subject, the audience greet him by the Chautauqua salute. A multitude of handkerchiefs instantly fluttered in the air as Judge Ewing rose and moved toward the footlights. The address covered, possibly, an hour and a half. Nearly one hundred believers in Christian Science were present, representing Chicago, Winnipeg, Iowa City, and localities in North Dakota. These lectures are rot, however, for the benefit of Christian Scientists, but for the information of the world in general, and this was a gathering of thinking people, as was evidenced by their motionless attention. The speaker elucidated the fact that the object of Christianity, as demonstrated in Christian Science, is not bodily healing, but the healing of sin, and that physical wholeness will always follow when the fossilized misconceptions of God are dispersed by the light of the Science of Being He said preaching was only a part of Christ's work. Jesus preached by teaching and healing the sick, and so should we. The records accredit him with preaching but one regular sermon and that was but once delivered. One of the objections most frequently hurled at Christian Scientists is that it is blashemy for them to claim that God has endowed them with power to heal the sick, but this objection is absolutely with power to heal the nothing to hurl it against. There is not a Christian Scientist in the circuit of the sun who ever claimed that God endowed him with power to heal the sick. Even Jesus did not claim to possess this power. He said he could of himself do nothing, the Father did the works; and so his followers to-day in Christian Science claim to have no healing power. It is God alone who heals. Mr. Ewing spoke lovingly and gratefully of Jesus, the Galilean Saviour, whose sinless life is without a parallel. He also referred in affectionate and grateful terms to the Rev. Mary Baker Eddy, the Leader of to-day, who has given to the world the divite Principle of Jesus healing work. 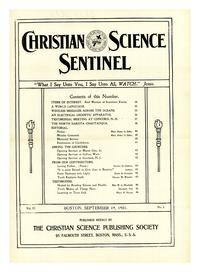