There are upwards of forty rear admirals on the navy retired list of the United States. The oldest is Thomas O. Selfridge, who is now nearly ninety-five, and is said to be the oldest retired naval officer in the world. His son, Thomas O., Jr.,is over sixty-five years of age, while there is a younger brother over fifty who is a commander in the navy.

The San Juan Council has appropriated six thousand dollars yearly for the support of a public library. The idea is to combine a public library for San Juan and also have a distributing library for other portions of the island of Porto Rico. The authorities expect to receive from Mr. Carnegie a sufficient amount to build the library. 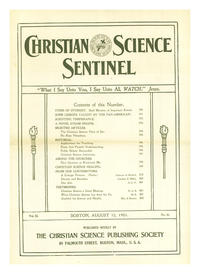