When the Brooklyn Bridge was opened for traffic eighteen years ago, an epoch in the history of New York and Brooklyn was marked. The structure was a marvel, and continues to this day to be one of the sights of this great metropolis. But it will have to divide the honors now with what is called the New East River Bridge, which crosses the river a short distance north of the first bridge; and in a few years these two structures will be overshadowed, so to speak, by the greater bridge which is to cross the river at Blackwell's Island. These three in time and turn will be small and insignificant indeed when the proposed Hudson River Bridge connects New Jersey and New York and is open for business.

A few weeks ago three steel cables, the first to connect the towers of the New East River Bridge, were stretched and secured, and now the vast undertaking will be pushed rapidly to completion. Although by no means the handsomest among notable suspension bridges of this country, the new East River structure will at least be the largest and stiffest. The span from tower to tower is 1,600 feet, the length from terminal to terminal 7,200 feet, and the width 118 feet, providing for four trolley tracks and two each of elevated railroad tracks, roadways, bicycle paths, and promenades. 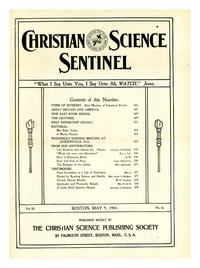