The Power of the Imagination

The following clipping from an exchange. well illustrates how a mere belief may affect bodily conditions. Faith is surely "everything where medicine is concerned."

"The power of imagination," said a New York druggist, "is past comprehension. Not long since a domestic in the employ of a prominent family came into the store in great haste with a prescription which called for two grains of morphine in two ounces of aqua pura—that is, distilled water—the accompanying direction reading, 'A teaspoonful every hour until the pain is allayed.' The patient for whom it was intended was the head of the family, who was suffering from a severe attack of nervous neuralgia. 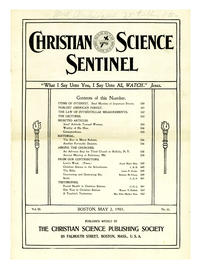