Some Peculiarities of the Postal System.

with contributions from Barnard Gilpin

The adhesive postage stamp was invented about sixty years ago. Ever since men began to write letters there had been some system for carrying them, but the sending of a letter was a complicated piece of business until the little gummed patch of paper was invented. Then, seemingly, everybody took to writing upon the most trivial pretext, and presently the postal system was doubling its capacity each year.

Now, when anything grows too fast, it is apt to tie itself in a hard knot. That is precisely what happened in this case. When folks had learned the convenience of the mails at home they began to send letters into other countries. Each nation had its own postal system, and when it received a letter from outside it made a charge for delivering it. If an Englishman sent a letter to Switzerland the French post-office charged a small sum for carrying it to the border, and the Swiss post-office charged a trifle more for taking it to the addressee. This made it necessary for each country to do an enormous amount of book-keeping, and even led to disputes as to which owed the other at the end of each year. To add to the confusion each nation had its own rate for letter carrying. 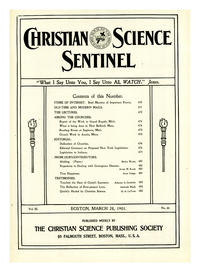