Russia has imposed a thirty per cent additional tariff on American imports in retaliation for an increase made by the United States in the tariff on Russian sugar. The Secretary of the Treasury claimed that the Russian Government was paying a bounty to exporters of sugar and the tariff was increased by the United States to neutralize the effect of the bounty. American exporters of machinery, who have built up a splendid trade with Russia, are displeased at the action of Secretary Gage and declare it was a serious blunder. The St. Petersburg newspapers have nearly all expressed regret that their government imposed the retaliatory treaty. Both press and people seem very friendly to America.

Former Congressman Tom L. Johnson, the well-known Single Taxer, was nominated for mayor of Cleveland, O., by the Democratic party February 19. Mr. Johnson has been for many years a successful steel manufacturer and street railway manager, being reputed a millionaire, yet he was one of Henry George's most intimate friends and he never lost an opportunity of pointing to the success of such men as himself in rolling up enormous wealth, as object-lessons proving the existence of special privileges which make the rich richer at a rate of increase wholly out of proportion to what it should be under equitable conditions. 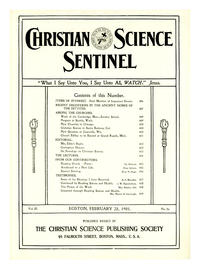