There was a large attendance at the Iola Opera House, Thursday evening, October 24, 1901, to hear a lecture on Christian Science by the Hon. William G. Ewing of Chicago. The audience was very attentive throughout the lecture. The speaker was introduced by Major Forest, a prominent lawyer of Iola, in the following remarks:—

Friends:—From time immemorial, covering all past known ages, among all nations, tribes, and clans—whether in the snow-capped frigid, the mild and genial temperate, or the jungles of the torrid zones of the earth, as far as discovered, from the lowest known intelligence to the highest of intellectual attainments, the great problem, "If a man die, shall he live again?" has been propounded, discussed, and answered, according to the environments and intelligence of the respective localities. We find implanted in every class of human beings a desire to worship something animate or inanimate, real and tangible, or mythical and spiritual, but always as merely typical of something beyond. 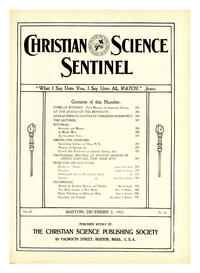