To the Editor of the Journal:—

Sir,—A great deal is being made of the statement that Christian Scientists are praying for the foreigners in China, and following this trend of comment, the Evening Journal of July 16 has some remarks on the subject. You very wisely say that "there is nothing especially novel in this," and I wish to point out that, like all Christians, regardless of creed or sect, Christian Scientists have, as individuals, been praying earnestly and hopefully for the safe deliverance of all in Pekin and elsewhere in China. Especial earnestness was given to these petitions because Mrs. Conger, wife of the United States minister to China. is a Christian Scientist. But it is not remarkable that Scientists should add their efforts to those of the united Christian world. The newspapers do not devote much space to an account of how the Methodists or Presbyterians or Catholies are praying for their friends in China. Why, then, this interest in what Christian Scientists are doing in common with other Christians? As you say in the article in question, "the action of Christian Scientists is commendable," but it is wrong to assume that this natural act has been advertised, consciously, by any Christian Scientist. Whatever notoriety has come is deplored by followers of this religion. It is neither sought nor desired. Also, I would call attention to the fact that, so far as I know, there is no official action of the Christian Science churches, as a body, though individual prayers are being offered. 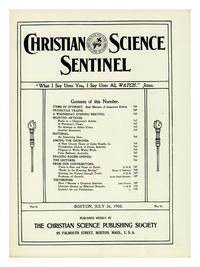