Strangest Church in the World

I have just returned, says a correspondent of the Cleveland Plaindealer, from visiting the most remarkable church in the world, a place of worship situated seven hundred and fifty feet underground in the heart of a coal mine, and fashioned entirely with pick and shovel by hardy toilers in the fossil woods. The strangest of all Christian temples is to be found at Mynydd Newydd, near Swansea, in West Glamorgan. My way to church lay first up a steep hill, then down by means of a wet and dirty iron cage to the bottom of a shaft, and finally through a series of mazy labyrinths, lighted by the glimmer of the miners' candles, to the chapel. It required considerable nerve on my part to get thus far, for it was my first visit to a coal mine, but having at last reaches the only coal-mine chapel in the world, I determined to make the best use of my eyes.

It is not an attractive-looking place. The walls are formed in part of small rough pine logs. The roof is somewhat menacingly close overhead, but it is of hard, smooth clift and has been whitened with lime, so that it looks like an artificial ceiling. As you enter you observe that the chapel is "timbered" with pit-props on either side and furnished with rude plank seats placed at equal distances between the props. The seating capacity is about a hundred. It is not much like a church, and yet there are points of resemblance, too, especially to the fanciful. The double rows of pine logs supporting the roof—what are they but the columns of this minster? The pathway leading between the seats and the pillars from the nave, and the seated portions inside the columns are the aisles of the building. There is not altar, but the high wooden desk at the end certainly suggests a pulpit. The little chapel is lighted by candles, which are stuck on the pillars and fitted vaults all round, an ample allowance of two being made to the pulpit. There is no regular officiating minister, but a conductor calls on any one he pleases, and there is no lack of spiritual gifts. The service is only held once a week—on Monday morning, at the early hour of six, before the men go to their daily work. 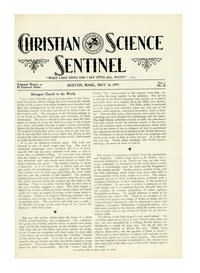