The largest audience in the history of the Opera House was present Tuesday evening, April 4, to hear Carol Norton, C.S.D., deliver a lecture on "Christian Science." Hundreds were turned away because of their inability to obtain seats. It is safe to say that almost every denomination in the Twin City was represented and they attended with the desire of hearing what Christian Science is, what it can do, and what it has done. The stage was adorned with flowers. There was a centrepiece of lilies and foliage, flanked with vases of cut flowers, calla lilies, and palms. On the platform were seated Mayor Eden, Mr. H. J. Bowman, and the lecturer.

Mr. Norton is comparatively young man, of prepossessing appearance. He has pleasing delivery, the characteristics of which are earnestness and dignity. He has the faculty of holding the close attention of his audience and conveying to them the meaning of his thoughts and arguments. The lecture occupied an hour and twenty minutes in its delivery. It was marked by a dignity that made it deeply impressive.

Send a comment to the editors
NEXT IN THIS ISSUE
Article
Reply to Mr. Purrington 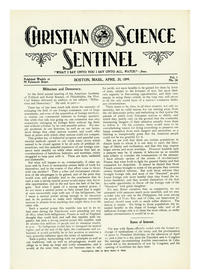