We send to you a sketch of the work in Lima, Ohio, that when enumerating the organized Churches of Christ, Scientist, we may be included, and thus share to a degree the realization of what "Church" means in the scientific sense.

It is ten years since the first case of healing was demonstrated in our city; and through this, a family of five were awakened to inquire into the means by which it was accomplished. In the succeeding year another case, just as remarkable, brought another family of three into the same light of spiritual life. The seed had been sown and had fallen in soil, prepared by suffering, where it took deep root, for thought it seemingly had many vicissitudes and hindrances, it grew.

Send a comment to the editors
NEXT IN THIS ISSUE
Testimony of Healing
I recall a time, when in stepping down from a stool in... 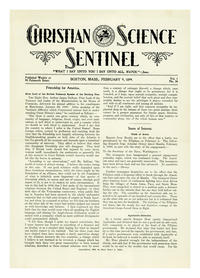