We are on the eve, not only of a new year, but of a new century. In every department of human life, secular and religious alike, old things are passing away and all things are becoming new.

The word "new" in this connection, however, is a relative term. Strictly speaking we should say with the wise man of old, "There is no new thing under the sun." There are varied applications of old things to new conditions, and these appear to be new. But every seemingly new thing is but an application, in a way before unknown, of an always existing principle. When a new continent was discovered, it was new only in the sense that the discoverer, and the inhabitants of other countries, had not previously known of its existence. 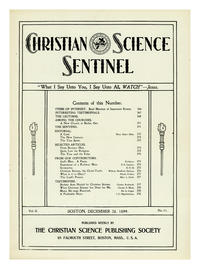