HE RECEIVED HIS ANSWER

In the Weekly of September 15, a short article appeared in regard to the healing of a little child from the effects of a fall, and the reading of the twentieth chapter of Acts in connection with it. This recalled to me an incident which might be of some interest, as it impressed me at the time. While in Interlaken, Switzerland, in 1890, the writer and a friend were conversing with the pastor of the American church at that place. The subject of Christian Science came up, and some quotations from Science and Health were made, stating that Life is God, not to be found in the body, and that a realization of this great fact would save from death. The friend was interested, but the clergyman was incensed, declaring the age of miracles past, etc. After a lengthy and heated remonstrance on his part he pointed to some workmen at work on a wall about fifty feet from the ground and said excitedly, "Do you suppose that if one of those men should fall from that wall he wouldn't be instantly killed? and no Christian Scientist nor anybody else could help it." The writer being rather confused at his attitude thought best not to try to answer him, but to leave it to God. The next day was Sunday, and as the clergyman proceeded with the service he was required to read as the Scripture appointed for the day, the twentieth chapter of Acts. As he read of the demonstration, under like circumstances, of the great Christian Scientist, St. Paul, his voice faltered and his evident confusion was proof that he was receiving the answer to his question. Three years after, at the close of that session of the Parliament of Religion at Chicago at which Christian Science had been represented, the same clergyman unexpectedly appeared in the throng. Almost his first words of greeting were in regard to Christian Science. His attitude had changed, and among other friendly remarks he said, "I have read the works of your Leader, Mrs. Eddy," adding in effect that in these days one must do that to be abreast of the times.

The writer felt, with thankfulness, that the finger of Love which had directed this man to his striking answer on that Sunday morning, was pointing him still further to the door of Christian Science which God hath opened, "and no man shutteth."

Send a comment to the editors
NEXT IN THIS ISSUE
Article
"AND A LITTLE CHILD SHALL LEAD THEM." 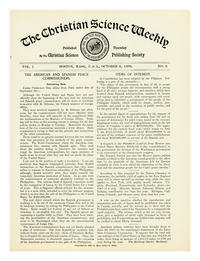