Seeing “none but the woman”

There’s a healing recorded in the eighth chapter of the Gospel of John. It’s a well-known account that is often viewed as either a lesson in not judging or condemning others or a healing of sin. A woman had been convicted of adultery, and the scribes and Pharisees were looking for an opportunity to accuse Jesus of not teaching and preaching according to rabbinical law. It was an attack on the very basis of his healing mission.

Although it’s unlikely that most of us would be confronted with a situation such as this, there may have been times when we’ve come face to face with the fear of disease or the harmful action of another, or we’ve felt in the place of the accused. We might feel condemned for a mistake we’ve made, or are feeling guilty for what we haven’t done, and believe we’re not deserving of healing. It’s tempting to search around in the problem. But Jesus didn’t go there. He did not question the woman about her sad history, the whys and wherefores of her situation. Nor did he ask the scribes and Pharisees more about this woman. His calm poise and dominion kept him safe, kept them both safe, kept them all safe.

Jesus knew who he was. He knew that his oneness with his Father was the source of his every thought and action. The spiritual fact of the inseparability of God and man (all God’s sons and daughters) also means our complete separation from anything that doesn’t originate with an all-loving God. And anything that has no divine cause has no right to exist or even present itself for consideration. Knowing this, Jesus was able to see God’s pure and perfect creation more clearly than anyone else ever has, right where discordant situations appeared.

Mary Baker Eddy writes: “To seek or employ other means than those the Master used in demonstrating Life scientifically, is to lose the priceless knowledge of his Principle and practice. He said, ‘Seek ye first the kingdom of God, and His righteousness; and all these things shall be added unto you.’ Gain a pure Christianity; for that is requisite for healing the sick” (Miscellaneous Writings 1883–1896, p. 270).

Every accusation against God’s perfect child, every belief of separation from God, every suggestion of suffering or self-condemnation can be seen for the lie that it is.

As the account continues, Jesus stooped down and wrote on the ground. Although the Bible doesn’t tell us what he was thinking or praying at that moment, when he finally spoke to the accusers, his response was a statement that has echoed down the centuries: “He that is without sin among you, let him first cast a stone at her” (verse 7). It had an immediate and perhaps life-changing effect on those accusing the woman, as it has for many since then.

Jesus didn’t wait for an answer but immediately returned to writing on the ground. And one by one, the accusers left the scene. One by one, the evidence of hatred, self-righteousness, and sin had to back off because it had no standing in the presence of what Jesus knew to be true, in the presence and power of Christ.

As we turn immediately to God when an error is dragged in front of us, we too can find our calm and dominion. Armed with Christ, Truth, we are able to help ourselves and others. One by one, every accusation against God’s perfect child, every belief of separation from God, every suggestion of suffering or self-condemnation can be seen for the lie that it is, without standing in God’s kingdom.

When Jesus again stood up after moments of prayer, the King James Version of the Bible tells us that he saw “none but the woman” (verse 10). Can we see this as an answer to the question of what Jesus was thinking or knowing during that time when he had, in effect, separated himself from the scene? He knew the spiritual fact of the woman’s true identity, and he saw exactly what he had been knowing—“none but the woman.” Jesus not only knew himself that she was the perfect, innocent daughter of God but also had to know that she knew it, and so could say to the woman, “Go and sin no more” (verse 11).

We too can see none but the perfect and sinless child of God as we stand with Christ, Truth, separate ourselves and others from the material scene, and pray more deeply to understand and insist on everyone’s inseparability from the infinite God, good. And through this we know we are gaining more of that “pure Christianity . . . that is requisite for healing the sick.”

Barbara Fife, Member of the Christian Science Board of Directors

Send a comment to the editors
NEXT IN THIS ISSUE
Keeping Watch
Whose life is it? 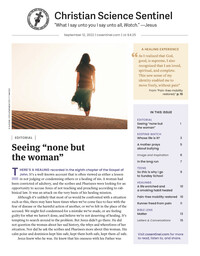