TeenConnect: Your Healings May 9, 2022 ISSUE

A quick healing of a fractured wrist

Originally appeared online in the teen series Your Healings -  February 22, 2022.

AARON CRANFORD — STAFF The basketball season was well underway, and things were getting pretty intense. Early in the second half of one game, another player knocked me down, and I noticed some pain in my right wrist. It didn’t seem too bad, and I thought I might be able to just put some ice on it and play in the next game. But when my coach saw how swollen my wrist was, he asked me to get it checked out before I played again.

A few hours later, I found myself at a medical clinic, where a doctor was explaining to me that I had fractured my wrist. He said that in order for it to heal I would need to wear a cast for about six weeks—meaning I would miss the rest of the basketball season and have to take my final exams left-handed. 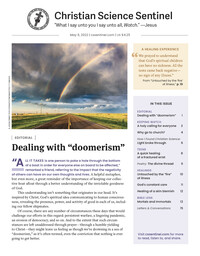