We ride planet Earth on its orbit around the sun with really no effort on our part. We don’t plead or pray for ourselves or our loved ones to accompany Earth on its path. We can’t argue, mistake, forget, sin, or condemn ourselves out of that orbit. We would easily recognize any notion that we are not in that orbit to be false, with no factual basis. We wouldn’t feel the need to get ourselves back into that orbit; we would just know that the suggestion was not true, was never true, and could never be true—that we could not deviate from that orbit if we tried.

Likewise, it is normal for God’s image to always be in accord with God, to know no other path than God’s. It’s divine law. This is the Science of being God’s image and likeness. It’s not pulling ourselves up “by our bootstraps,” nor does it include willfully attempting to bring about an outcome. Those are not productive approaches to progress or healing. 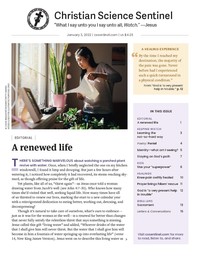