Your defense against manipulation

We can learn metaphysical facts that can help immunize us from the tendency toward mental manipulation and the temptation to contrive ways to get what we think we want.

Have you ever wanted something so badly, or believed so strongly that things should go a certain way, that you have tried to force those results to happen, only to have things end up in a “train wreck”? Throughout the centuries, many have individually or collectively tried to willfully influence situations within work environments, churches, families, or politics, with damaging consequences. How important, then, to understand what’s behind the desire to manipulate and how to set up a prayerful defense against such tendencies.

What tries to tempt us into manipulating others is the “self family,” which includes a self-agenda and involves self-will, self-love, self-justification, and selfishness. These are always the workings of mesmerism, or animal magnetism, of which Science and Health with Key to the Scriptures by Mary Baker Eddy says: “Mesmerism is mortal, material illusion. Animal magnetism is the voluntary or involuntary action of error in all its forms; it is the human antipode of divine Science” (p. 484).

Send a comment to the editors
NEXT IN THIS ISSUE
Keeping Watch
Self-immolation: Purifying, not condemning, self 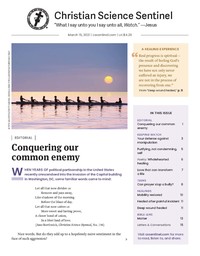