Mighty moments with the Christ

I had what I considered to be a well-planned and happy life. But that came to an abrupt end when my cherished marriage fell apart over a period of two and a half years. Not only did I have strong feelings of betrayal, injustice, and loss, but I also needed to find both employment and a home for my children and me, as well as to take on the majority of both fathering and mothering. As I faced my new life, I suddenly had a mighty moment alone with the Christ.

To give some context, I’ve often thought of the transforming encounter that Saul (later known as Paul) had with the Christ on the road to Damascus (see Acts 9:1–20). In the Bible, it is recorded that Saul was “breathing out threatenings and slaughter against the disciples of the Lord” as he set out to arrest Christian men and women and take them to Jerusalem to be tried.

Send a comment to the editors
NEXT IN THIS ISSUE
Article
Prayer: A powerful resource now and anytime 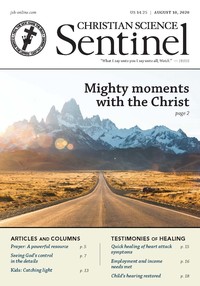