Which thoughts are you listening to?

Originally appeared online in the teen series: Your Healings - May 7, 2019

I wouldn’t say I was excited for my school’s annual Outward Bound trip. But with one year of high school and one Outward Bound trip under my belt, I did feel mentally and physically prepared for all of the challenges I knew lay ahead. And yet, here I was, two days before we even left, already facing my first obstacle.

It was the Thursday before our rafting trip in Idaho. I came home from school and immediately started feeling awful. Headache, warm body—these feelings were all too familiar. I knew exactly what was coming. And along with the symptoms of illness came a stream of lazy thoughts that slipped through the cracks and almost convinced me that I was better off just giving in to feeling sick rather than trying to fight it.

This is a perfect excuse not to go.

It’ll be nice to have a week off from school.

Even though I was facing this internal battle, I knew I could do something right away. I’ve learned in the Christian Science Sunday School that God gives us health and the power to challenge and overcome anything that isn’t good—including sickness. I also remembered something Mary Baker Eddy wrote in Science and Health with Key to the Scriptures that explains how to do that: “Stand porter at the door of thought. Admitting only such conclusions as you wish realized in bodily results, you will control yourself harmoniously” (p. 392). I realized I needed to watch which thoughts I was letting in and only allow in the good ones—the ones God gives us.

God gives us the power to challenge and overcome anything that isn’t good—including sickness.

My mom called a Christian Science practitioner to pray for me. While I was trying to expect a healing, it was really a struggle that day. Laziness and schoolwork got the best of me, and I went to bed that night in a bad state. The next day, I felt even worse and missed school. As the day went on, fear and worry about the trip started to set in, but I almost felt too lazy to care.

I started to have a wrestling match in my head. It was like in the movies when there’s a devil on your right shoulder and an angel on the left: One set of thoughts was trying to get me to give in and give up, while the other wanted me to push through and take a risk by going. I realized that I didn’t want to listen to either, because one would take me down the path of laziness, while the other felt like the path of human will. What I really needed to do was listen to God so I could be healed. I realized that good thoughts from God were calm and comforting, not tumultuous.

My mom read to me from Science and Health: “God is infinite, the only Life, substance, Spirit, or Soul, the only intelligence of the universe, including man” (p. 330). Thinking about how all-powerful God is helped a lot, and by the time I was ready for bed, I was feeling much better. My mom, who was praying with me, reassured me that I could trust God.

I had to get up before three a.m. so I could get to school on time to leave, and when I woke up early the next morning, I was feeling even better. The battle in my thinking had stopped, and I was more peaceful as I listened to the thoughts from God that reminded me He was taking care of me.

I had fun with my friends on the bus and plane rides. Any evidence of sickness completely disappeared, and I was ready to have a worry-free trip tackling the rapids.

This healing taught me that I can always listen to and trust God, no matter the situation. 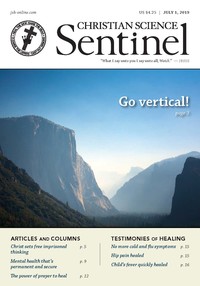