I figured the friendship was over. My former friend and I were in a dispute after consistently doing things to humiliate each other as well as talking about each other behind the other person’s back. Some of this happened at school, and some of it was over social media.

It seemed we would never talk again; we couldn’t stand each other, and we were both angry and hurt. But we went to the same school, so we still had to deal with each other.

I held a grudge against my former friend for a long time. I told myself that I didn’t like him and had to be enemies with him. It was hard to forgive him because of my pride. But in the back of my mind, the grudge bothered me because we used to be friends. It took more than a year before I was willing to try to think differently about the situation.

From attending the Christian Science Sunday School, I knew that prayer could help me with any problems, even tough ones. I also knew that forgiveness was something that Jesus put a big emphasis on, so that’s where I started my prayers. Jesus taught us to love our enemies, so I knew this was how I should live my life, too. He said, “Love your enemies, bless them that curse you, do good to them that hate you, and pray for them which despitefully use you, and persecute you” (Matthew 5:44).

That’s a big demand, but I knew that the reason it was possible is that Jesus also taught that we are all children of God. This means that everyone includes and can express good qualities, because God is good and made us in His image. If we can’t see those qualities because of the way someone is acting, we need to ask God to help us see that individual spiritually, which is what allows those qualities to shine through.

It was hard for me to swallow my pride and see this individual as a child of God, and I struggled so much with the idea that I gave up for a while. Then the first day of school rolled around, and I found out that this person was enrolled in my favorite class. I was having a tough time coping because I found it difficult to be in the same room with my former friend without thinking negative thoughts. That’s when I started praying again.

I decided I would look for something that I could appreciate about him—something good that would point to the fact that he really is a child of God. I realized that every day in class, he worked hard. And hard work is something that I have very high respect for. Every day, as I noticed how hard he worked, I couldn’t help but see even more qualities of God that he clearly expressed.

If we can’t see good qualities because of the way someone is acting, we need to ask God to help us.

The more I looked for the child of God, the more I saw a child of God in action, expressing Godlike qualities. And I began to see that this was true for both of us—that we were both children of God and always had been. The pride, anger, and hurt that I’d felt were replaced by an appreciation for the good that really characterizes him, and that I also express.

Soon, we started talking again. We showed more respect for each other, put the bad experience behind us, and got to know each other better. A healing happened in our relationship, and to this day we are still friends.

This experience showed me that even the challenges that seem hard to overcome, like a grudge, are not so hard when you allow God to transform your thoughts about yourself, the other person, and the situation as a whole. Even the most overwhelming negative feelings become powerless when you learn what God is and the way He made each of His children: good. 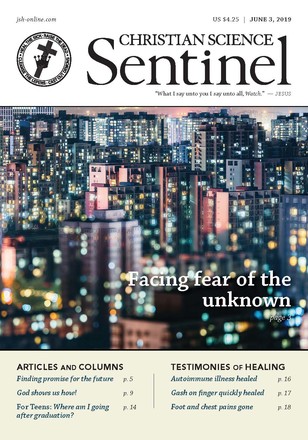 You asked: ‘Why do you want our opinions?’

Facing fear of the unknown

Finding promise for the future

Let go of the old to embrace the new

God shows us how!

Finding Christian Science and growing in it gradually

How I got rid of a grudge

Where am I going after graduation?