What does it mean to live in God’s kingdom?

About midway through a two-week service trip to Guatemala, my group took a weekend excursion to Santa Cruz la Laguna. Shortly after we returned, some of the students I was traveling with began to feel unwell. A day or two later, I also began to feel ill. I thought, “Oh, no. This is going to be awful,” because some of my friends had described how they’d felt while they were sick, and I didn’t want that to happen to me.

After breakfast that day, I went to the Christian Science practitioner who had traveled with us and asked for her help in finding a place to begin with my prayers. The idea that she shared with me was that no matter where I am in the world, I am always in the kingdom of God, and there is no sickness in His kingdom. This means that I can never be outside God’s care or protection, or outside His loving all-presence—which excludes sickness—because God governs everything, everywhere. She also shared the idea that I am an expression of divine good, and as that expression, I can’t also embody something bad, like illness. I prayed with these ideas throughout the day, and also read the weekly Bible Lesson found in the Christian Science Quarterly when I needed to feel inspired. I knew that keeping my thought close to God was a way of feeling more tangibly that I really was in God’s kingdom.

Send a comment to the editors
NEXT IN THIS ISSUE
TeenConnect: Your Healings
The right ideas when you need them 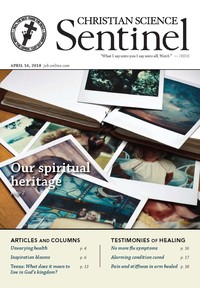