A tale of how to open one’s arms to refugees

Originally published in The Christian Science Monitor, May 15, 2016.

The world is in an age of extreme human mobility. A quarter billion people have either fled disasters of various sorts or migrated to escape poverty. If they were all in one place, it would be the fifth largest country. Most are in the Middle East or Africa. But if any place currently represents an extreme influx of migrants, it might be Lac La Biche, a town of fewer than 3,000 people in Canada’s province of Alberta.

In early May, after a massive wildfire in nearby Fort McMurray forced 80,000 people to quickly escape, Lac La Biche ended up hosting an estimated 8,000–12,000 of the evacuees. Its population, in other words, nearly tripled almost overnight. With only about 1,000 residences, the town’s people might have panicked. The evacuees, after all, were strangers, and fearful ones, too. To paraphrase Bertold Brecht, they were “harbingers of bad news.”

Send a comment to the editors
NEXT IN THIS ISSUE
'To Bless All Mankind'
Unselfish helpers—can I be one? 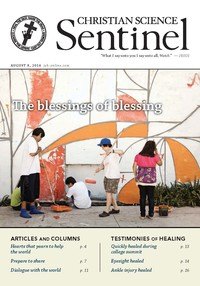