A most important wedding guest

June is still the most popular time for weddings, and while my husband and I did not marry in June, we did meet at a June wedding reception. Bill had served in the Navy, gone to college, and had recently accepted a job in the city where I lived. I had just returned from college in another state for my summer vacation. After we started dating, my mother very sweetly alerted me to the fact that he was at the point where he was looking for someone to marry, and I sweetly commented that I was well aware of that.

We dated during the summer, and, before I returned to college in the fall, he asked me if I would wear his fraternity pin. Being “pinned” was not a commitment to marry, but it was a commitment not to date anyone else. But before I could say “Yes” or “No” he said: “Before you answer, there is something I need to tell you. I don’t know where our relationship may lead, but you need to know that I am a Christian Scientist, and I am always going to be one. When I marry, I will expect my wife to let me live the life of a Christian Scientist.” 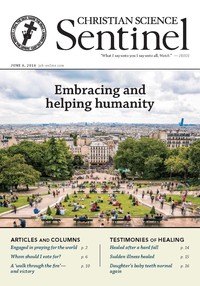