While growing up in a suburb of Chicago, I was raised in an orthodox Christian church. In high school I began dating my future husband, who had been brought up in the Church of Christ, Scientist. We often discussed religion, and we at­tended each other’s Sunday church services. I was impressed by his knowledge of the Bible, his spiritual insights into Bible stories and passages, and his willingness to rely on prayer and his understanding of God to heal any and all discordant challenges he faced.

It wasn’t until much later, after we were married and had two children, that I became serious in learning more about Christian Science and demonstrating God’s healing power for myself. During one summer, I suddenly became very ill. My physical condition declined so drastically that it appeared I might pass on. 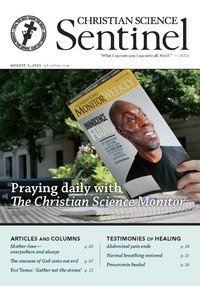