A few years ago when our youngest son was in high school, he remarked one morning before school that he had a rash of some kind on his stomach. Later that day he went to the school nurse’s office to get a band-aid to cover the area. The nurse called me to say she had noticed that our son had shingles and needed medical attention. I thanked her for her call and assured her we would take care of the issue. Later that day when our son was taking off his sweater in band class, his T-shirt rode up, exposing his stomach. The band director commented that he too had dealt with that condition and that it had been difficult.

At home that evening our son, my husband, and I talked about how we could pray to address this. Our son suggested we work with a statement he had recently studied in Christian Science Sunday School, “Spiritual sense, contradicting the material senses, involves intuition, hope, faith, understanding, fruition, reality” (Mary Baker Eddy, Science and Health with Key to the Scriptures, p. 298). 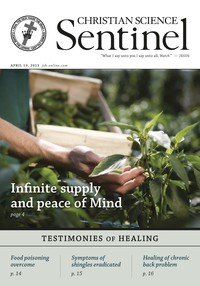