A strong defense at the Boston Marathon

Running is probably the most accessible sport worldwide. From a carefree jog in the park to the peak of athletic competition, people from every continent on the globe dedicate themselves to this activity. At the far end of the competition side of the spectrum is one of the world’s best known road-racing events, the Boston Marathon. It is the second largest single-day sporting event in the United States, just behind the Super Bowl, and over 90 countries will be represented at this year’s competition. The Boston Marathon is also the world’s oldest annual marathon—this year will be the 118th race. Year after year, this event is an international stage for breaking records and redefining the boundaries of physical endurance.

Recognizing the scale of the Boston Marathon started me thinking about what it represents to our world in terms of spiritual growth. Looking back over the course records one can see that race times have been getting consistently faster over the decades, with no sign of a plateau in sight. What impels this advancement? One could see it simply as the human will to push yourself to go faster than the person next to you. But in her book Science and Health with Key to the Scriptures, Mary Baker Eddy points to a spiritual cause: “Progress takes off human shackles. The finite must yield to the infinite. Advancing to a higher plane of action, thought rises from the material sense to the spiritual …” (p. 256). Consistent progress indicates something beyond human will—it points to a spiritual animus leading humanity out of material limits. The source of this progress is God, whom the Bible refers to as “Spirit” (see John 4:24).

Send a comment to the editors
NEXT IN THIS ISSUE
Spiritual Lens
"The floral apostles..." 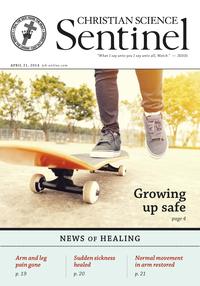