One day when my son, Andy, was four or five years old, he went out the front door of our house to get the mail. Since it was cold out and he had been asked not to leave the front door wide open, he slammed it shut, not noticing that his finger was in the locking mechanism. He badly injured his finger pulling it out of the door, and I heard him holler from the other side of the door.

I ran downstairs, held Andy close, and reassured him that everything was all right because God, Love, was with us. I asked his sister to get some paper towels for Andy’s finger. I was praying, expectantly reaching out to God for an answer, and one thought that immediately came to mind was a quote from First Corinthians 14:33, which reads in part, “God is not the author of confusion, but of peace.” 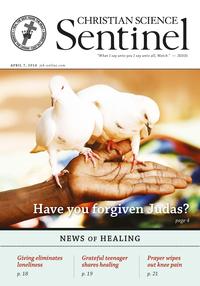