In 1974 I had my first healing in Christian Science.

During one routine checkup when I was in my 20s, my doctor told me: “I’d like to do another checkup with a second physician.” That additional exam led to a biopsy. A few days later, the second doctor called to tell me they’d found cancer and that I needed to go straight to the hospital for surgery. “If you don’t have this operation,” he said, “you’ll be dead by the time you’re 40.” 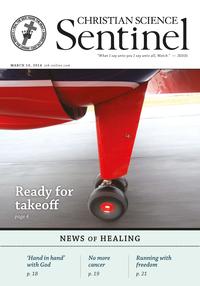