Who's watching the kids?

Little Brian Jay’s mom used to read him a story every night before bedtime. It told of how all the stars in the sky are like God’s eyes watching over His creation. Of course, this was intended to be a comforting idea. But one night, Brian Jay’s mom came to his room and discovered all the shades pulled down tight and the bedcovers pulled up high. When asked what was wrong, the young boy replied from deep in the dark, “I don’t like all those eyes watching me.”

As a single mom to a teenager, I would have appreciated a few more eyes on the scene to help keep track of my daughter! When my husband passed on, I felt as if I were drowning in the deep end of the pool as a parent. So much was happening at once. She was quickly growing up, and boys were starting to call the house. The Internet, with instant messaging to a wide world of strangers, was just beginning to take hold. Everything was changing in front of me and fear was spinning me out of control. I couldn’t watch her all the time, could I? Yet, I felt like that was my job now. 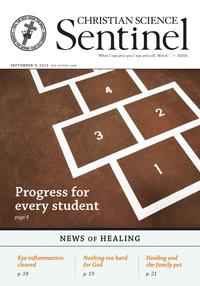