The other day I looked deep into the bottom of a cool pond and had an absolutely clear (even somewhat magnified) view of the rocks, fish, and plants that were in front of me. The fish and plants were either totally still or moving in a logical way. But when I looked at the surface of the water of that same clear pond, I didn’t see what was really in front of me. Instead, I saw the sky, trees, and other things around and behind me reflected on the water’s surface.

I noticed that even though it was a calm day, it took only a slight breeze on the water to make the surface reflection appear unstable or unclear. Some of what I saw was beautiful and some was not, but everything reflected appeared to be subject to outside forces of chance and changing winds, currents, or waves.

Sue Holzberlein is a Christian Science practitioner in Ashby, Massachusetts. 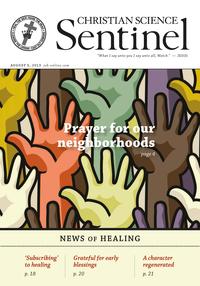