Freed from stomach and throat conditions

Originally written in Spanish, this testimony first appeared in the December 2013 Spanish, French, German, and Portuguese editions of The Herald of Christian Science.

When my daughter was 18 months old, she became seriously ill with a stomach condition and was unable to retain any food. We took her to a physician, but days later she was admitted to the hospital because she was not responding favorably to the medicine he had prescribed. Hours later, the doctor told us our daughter was in critical condition. He thought she wouldn’t live through the night.

My husband suggested that I call his aunt who was a Christian Science practitioner. I knew nothing about this Science, but when he told me that this woman prayed for those who sought healing, I gladly accepted. When I called the practitioner, she told me not to worry and asked me to leave everything in God’s hands, so I did. She said that she would pray about the situation. That night, I was able to quickly go to sleep. 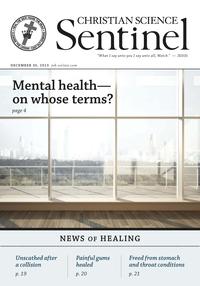