A recent news story reported on a number of computer attacks aimed at the natural gas industry in the United States and Canada (see “Alert: Major cyber attack aimed at natural gas pipeline companies,” csmonitor.com, May 5, 2012). These cyber attacks make use of “spear-phishing,” an approach in which attackers attempt to gain a digital position within corporate networks through an employee’s e-mail. The article stated that this kind of access “can eventually allow a hacker to wind . . . into the vital industrial control processes. Those systems, if infiltrated, could allow hackers to manipulate pressure and other control-system settings, potentially reaping explosions or other dangerous conditions.”

Reading about these computer threats reminded me of a story in the Bible. The king of Israel and his army had eluded the raids of the Syrian king, Ben-hadad, again and again. It was discovered that the prophet Elisha had been able to warn the king of Israel before each attack, so the Syrians’ efforts were thwarted. Then, when Ben-hadad learned of Elisha’s work, he sent his troops to capture him (see II Kings 6:8–14). 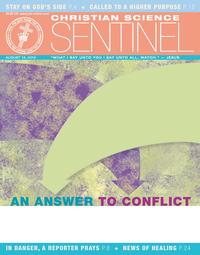