Healed after an accident

Several years ago I was working as a carpenter, though I had taken the summer off to work with Christian Science teenagers. We were enjoying a night off as a group just after returning from a five-day hiking trip in the backcountry. While playing around, I jumped from a height and landed badly, severely injuring my back. I couldn’t move, let alone walk, and was in so much pain I could neither think clearly nor focus. I was carried to a van, where I was laid down for the ride back to where we were spending our summer. I was carried inside and laid on a bed.

A Christian Science practitioner was immediately called at my request. At that point, there was only one thing I was sure of: I wanted to make this a demonstration of healing in Christian Science. I had relied on Christian Science for healings in the past, and while this felt more dramatic than anything I’d dealt with before, I wanted to handle this case through spiritual means as well. The practitioner wasn’t taken in by the drama of what had happened, but rather perceived clearly the reality of man, not as material and capable of being damaged but as spiritual—created by, and in the image and likeness of, an only good God, who knows nothing but perfection. 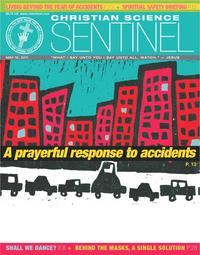