Our occasional series on how people have nurtured their public practice of Christian Science healing.&nbsp;

I didn’t have to be perfect first

I truly had a happy childhood where Christian Science was lived by my family. However, when I left school I somehow felt that there were some challenges Christian Science would not heal, or that I was unable to demonstrate it fully—that my understanding was not good enough. At one time when my children were very young, I had painful symptoms of sinusitis. Although I had a practitioner helping me through prayer, still this illness did not yield and I had to depend on my mother to help with the children. I then decided to seek medical help and told the practitioner. She told me not to feel guilt, as it was a useless sentiment. I was prescribed medication with painkillers to take every four hours. And, right on the fourth hour the pain would kick in again. After a day or two of this I thought, “This is ridiculous! If it takes the rest of my life, I’m going to work this out prayerfully through Christian Science.”

I sat down to read the Christian Science Bible Lesson after the children went to bed. It seemed that every sentence was written for me. When I got to the end I was left with one question, “What is mortal mind?” I studied the definition in the Glossary of Science and Health by Mary Baker Eddy, and this part leapt out at me: “. . . the belief that sensation is in matter . . .” (pp. 591–592). I saw this so clearly and knew I was healed. I realized later that I had also been healed of the belief my understanding was inadequate to heal some things. Shortly after this healing I took class instruction in Christian Science, which helped me heal more consistently. 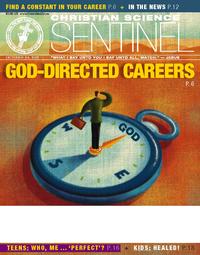