There are some amazing true stories about lions. I remember one about a lion in Kenya, who adopted a deserted baby oryx and cared for it like a mother (an oryx is an animal that looks a bit like an antelope). On the Internet, you can see a video on YouTube about two young men from England who raised a lion cub named Christian. When the cub got too big for their apartment, they took him to Africa to live in the wild. A year later they went back. It took them many hours to find Christian. He was now a full-grown lion with his own pride, and could be dangerous to people. But as soon as Christian saw them, he bounded to greet them, exuberantly jumping up and hugging them with his big paws (for example, see www.people.com/people/article/0,,20215715,00.html)

Probably one of the most awesome Bible stories is about Daniel in the lions' den. You'll see and hear a lot about it in this Kids' Sentinel. Twelve-year-old Tommy told us that he likes it so much because it's about moral courage. Mary Baker Eddy, who discovered Christian Science, once said that "moral courage is the 'lion of the tribe of Juda', the king of the mental realm" (Science and Health, p. 514).

Send a comment to the editors
NEXT IN THIS ISSUE
Article
Stick with GOD, your best friend 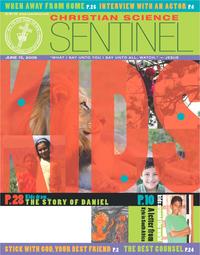