One day when my youngest daughter was about three years old, she pulled down her Christmas stocking from the fireplace mantle. The heavy metal stocking holder came crashing down with it, hitting her in the face. I'd been sitting nearby when this happened, but was unable to get to her in time. A tremendous sense of anguish, fear, and guilt swept over me for displaying those stocking holders. My daughter was crying and had a deep cut on her face, so I scooped her up and began comforting her. I gently pressed a clean cloth to her face and told her how much God loved her. I acknowledged the spiritual truth, as taught in Christian Science, that she could not be vulnerable to accidents of any kind, and that she could not be outside of God's care or protection for even an instant.

As I held my daughter, I spoke these spiritual truths out loud. Then I picked up the phone and called a Christian Science practitioner for prayerful support. After I talked to the practitioner, my husband, who is not a Christian Scientist, called, and when I told him what had happened, he said that he wanted a doctor to take a look. I told him that I'd contacted a practitioner for help, but that I would take our daughter to a doctor to respect his wishes. When I called the doctor's office, they said they couldn't see her for several hours, so I made an appointment and kept praying. Soon, my daughter calmed down. But when I looked at her face, a black eye was developing, and the gash from where the stocking holder had made contact was alarming. 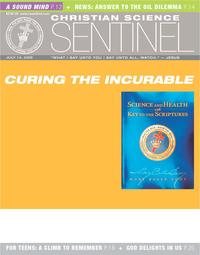