A few years ago, I was rehearsing for a play in Munich, Germany, in the hot September weather. Since the character I was playing was a young boy, I had to jump on and off scenery and run around on stage, demonstrating lots of physical exertion and flexibility. During rehearsal one day, I seemed to pull a muscle in my back, and I was in some pain. My movement became restricted, and I felt as if something was physically out of place. I was about to tour with the play for nine months, and for a moment I became fearful that a possible injury might jeopardize my rehearsals or performances. However, as a student of Christian Science, I knew how important it was to pray and turn to God, rather than focus on the physical symptoms. So that's what I did.

That night, after the rehearsal, I went back to my digs where I could be alone and spend some quiet time praying. I picked up a copy of The Christian Science Journal, and as I prayed with ideas from the articles I was reading, I began to feel peaceful, and any fear that my movement could be restricted began to fade. In one particular article, the writer talked about God's children having "dynamic and effortless" being. Wow! That phrase jumped out at me, and I realized anew that my real substance was spiritual. I wasn't a material body that was trying to be strong enough or energetic enough to build up enough endurance for a long theater tour. I maintained that my real "body" was my spiritual identity—the substance of God's thoughts—and was therefore painless, effortless, dynamic, and free. That meant that my job didn't involve a learning process of muscle memory with a risk of muscle strain, reaction or overaction. 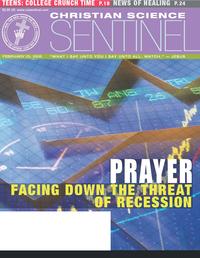